Los Angeles Football Stadium to be Designed by Gensler

Gensler won out against two other firms – HNTB and HKS.  Although HNTB drew up plans for Invesco Field in Denver and HKS sketched plans for Cowboys Stadium, AEG selected Gensler because they already have experience working within the L.A. Live site.

Gensler designed a 54-story hotel and has more familiarity with the environmental requirements of the large venue.

According to AEG, this experience will save them two to three months in the approval process.

The obvious question remains of whether Los Angeles can score a football team, which they have not had since 1995.

Update: AEG has released a drawing of the stadium. 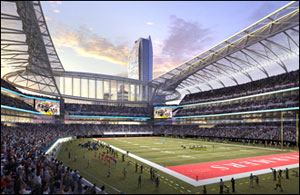